PLEASURE SQUAD
I first learned about the phrase or better still title ‘Pleasure squad’ of recent from a YouTube video of a North Korea defector. Once she mentioned the word, it had my attention and I wanted to know more, to find out about the phrase and the string it holds on those bearing it, not forgetting the reputation North Korea has when it comes to human rights violations and cruelty as unique in a Totalitarian rule/ dictatorship. I had my suspicions that it belonged to girls/women and my suspicions were correct yet astonishing and upsetting on the very condescending word.
PLEASURE SQUAD Kippumjo (which means happiness squad) was created by Kim Il-sung the founder of North Korea when he asked his high officials to go into the country to scout for the ‘most beautiful girls to be singers and dancers to those in the upper echelon’. The sexually attractive ones are taken as ‘comfort women’ for the powerful leaders of the party. The girls are scouted at age 13-15 and are taken away from their parents and home to be trained for these ‘special assignments’ as their parents are told. The girls are medically screened and must be cleared as virgins before they can join the squad as Kim Il-sung believed that being with virgins helped to absorb their ‘life-force’ also known as ‘Ki’.
After being scouted the girls are divided into 3 groups. Some to sing and dance during parties, some to be a masseuse to the party leaders, and the most special group is the ‘Manjokjo’, the sexual service squad. Some of the girls are even sent abroad for training. The girls are made to sign a pledge of allegiance to the ‘Dear leader’ and are not to contact their families during their service time as they live in Pyongyang the capital in the ‘dear leaders’ mansion or ‘summer villas’. North Korea defectors who were members of the Pleasure squad has revealed all they were made to do, a former member spoke up and said they had parties where the honchos would get drunk and start playing games in which the loser would take off his/her clothes one after the other and when it gets intense they start the hair-shaving game where the loser would have to shave a part of his hair, the females to shave their pubic hair. It’s being reported also that when the party leader is in a very good mood, he organizes a party solely dedicated to sex. When the girls are nearing age 25, it’s their time to retire and to ensure that the secrets of the pleasure squad stay enclosed, they are married off to members of the elite and the ‘Dear leaders’ inner caucus such as military officers and guards. 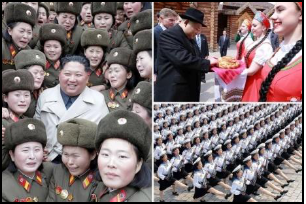 (The Sun UK)
Kim Jung-Il kept the pleasure squad after his father’s death. The girls were exploited and sometimes auctioned off to dictators. After the death of Kim Jong-Il in 2011, the pleasure squad was disbanded and Kim Jung-un took power. Everyone thought it was the end of the squad due to Kim Jun-un supposed westernization due to his Swiss education, not until Kim Jun-un put together his pleasure squad for his gains and that of his honchos in 2015, four years after its supposed disbandment.
The most horrifying thing about the pleasure squad are the untold stories of millions of girls who have been and are still being subjected to this horrible experience.